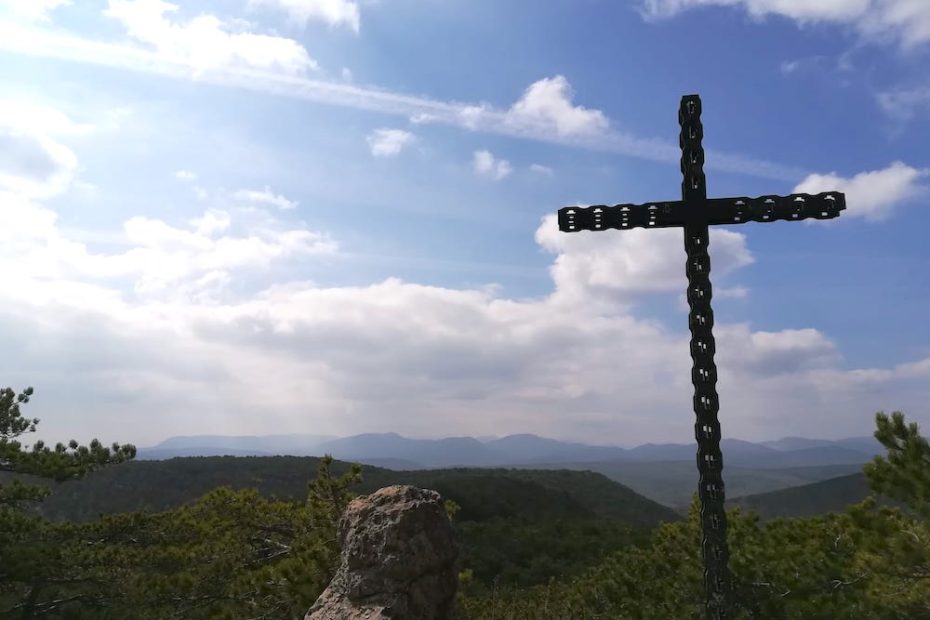 On a sunny day  I took my bike for a ride to Jubilaeumskreuz. A woman, sitting at the only bench in the sun, was enjoying the marvelous view .

She invited me to sit down and we had a nice chat. To my surprise she was 85 years old. She told me, that she had taken care of her sick husband for 9 years, a time when she hadn’t had the chance to walk as much as she had during their marriage. After his death she soon started hiking again and has never stopped since.
After a while I was ready to leave to take the trail down to the parking lot. “Have a safe ride”, she wished me, twice. That was slightly irritating to me.
I had ridden the trail already a few times. I knew, I could do it rather well. Although the last turn was always a challenge for me.

Upon arriving at this very turn, I realized that rain had washed out the soil between the roots quite a lot. I stopped, as I had to think about a new way to make it through the turn based on the new conditions. While standing at the edge of trail, I saw a man coming down the trail quite fast. He seemed to be a very good rider and made this turn quite easily.
Carefully watching which line he took, I decided to take a similar one.

Taking the last turn was not easy on this day. The woman’s wish “Have a safe ride” had made me think briefly what could possibly happen while mountain biking.
But in the end, I took a deep breath and then made the last turn decently.

At the parking lot I met the guy from the trail again. We had a short chat and I told him, that his riding was motivating for me.
He obviously liked the remark.

An 85 year old woman, hiking all by herself, was impressive
and a motivational boost for me at the same time.
Like the guy, who made it so easily through the last turn.

We use cookies on our website to give you the most relevant experience by remembering your preferences and repeat visits. By clicking “Accept All”, you consent to the use of ALL the cookies. However, you may visit "Cookie Settings" to provide a controlled consent.
Cookie SettingsAccept All
Reject All
Manage consent

This website uses cookies to improve your experience while you navigate through the website. Out of these, the cookies that are categorized as necessary are stored on your browser as they are essential for the working of basic functionalities of the website. We also use third-party cookies that help us analyze and understand how you use this website. These cookies will be stored in your browser only with your consent. You also have the option to opt-out of these cookies. But opting out of some of these cookies may affect your browsing experience.
Necessary Always Enabled
Necessary cookies are absolutely essential for the website to function properly. These cookies ensure basic functionalities and security features of the website, anonymously.
Functional
Functional cookies help to perform certain functionalities like sharing the content of the website on social media platforms, collect feedbacks, and other third-party features.
Performance
Performance cookies are used to understand and analyze the key performance indexes of the website which helps in delivering a better user experience for the visitors.
Analytics
Analytical cookies are used to understand how visitors interact with the website. These cookies help provide information on metrics the number of visitors, bounce rate, traffic source, etc.
Advertisement
Advertisement cookies are used to provide visitors with relevant ads and marketing campaigns. These cookies track visitors across websites and collect information to provide customized ads.
Others
Other uncategorized cookies are those that are being analyzed and have not been classified into a category as yet.
SAVE & ACCEPT