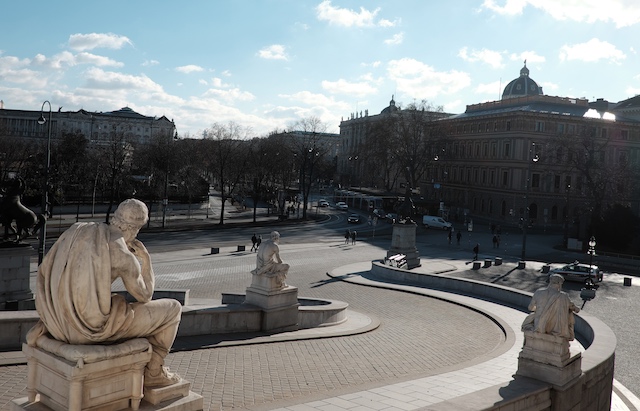 In two class sessions, we will listen to music from the famously musical city of Vienna- now the capital ofAustria, but formerly, until 1918, the royal seat of the vast and diverse Habsburg Empire under the legendary Kaiser Franz Joseph. We will utilize CDs, DVDs and You Tube, and we will talk about the significance of Vienna whilewe view projections of a new set of relevant photos taken by our Austrian guest pianist, Anna Wagner.

We will begin with the three great composers who are called “The Viennese Classicists,” even though none of them was actually born in Vienna!
Then we will turn to Franz Schubert, the composer of early Romanticism who epitomizes “Old Vienna” and was factually born in what was then a suburb of Vienna! We will discuss the role of cafes and waltzes in Viennese society and listen to the melodies of the legendary “Waltz King” Johann Strauss II, who held his popularity right up to Emperor Franz Josef’s Jubilee Celebration of 1898.

Our second session will continue to intertwine historical context and “fast forward” to the waning twilight years of Franz Joseph’s Austro-Hungarian Empire past the last quarter of the 19th century. We will hear music that is both delicate and robust from the North German Johannes Brahms, who moved to Vienna in 1863 and died there in 1897. We will encounter Hugo Wolf, who carried on Schubert’s genius of masterful poetic settings to music. We will also experience the colossal post Wagnerian orchestral forces of Gustav Mahler and hear premonitions of modernism and the downfall of the old order. And we will discuss the Viennese-born Arnold Schoenberg and how he and his circle who began as late Romantics, eventually revolutionized the old rules of writing music. We will find out how Schoenberg chose a different path from the highly successful Richard Strauss and how the atonalist’s influence was felt in Europe and later on in America.

Concert at the Presbyterian Church
Feb. 22
The third meeting will be a live music presentation with commentary drawn from or relating to the music heard in the classes. Viennese guest pianist, Anna Wagner will play works by Schonthal, Schubert and Mozart and will accompany songs at the piano performed by Mezzo-soprano Marietta Dean.

This concert will be free and open to the general public.

Ruth Schonthal:
Self Portrait of the artist as an older woman

This website uses cookies to improve your experience. We'll assume you're ok with this, but you can opt-out if you wish. Cookie settingsACCEPT
Reject Read More